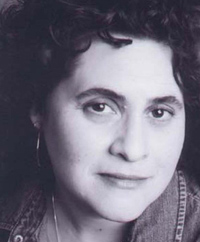 Multi-instrumentalist/vocalist, choral director, Miriam Davidson grew up in a family where playing music was a natural as breathing. She began writing songs in high school, influenced by all genres and styles of music.

Miriam served as an associate director and head of the songwriting department for the National Guitar Summer Workshop in New Milford, CT for 13 years and formed the band Wishing Chair with Kiya Heartwood. Wishing Chair has toured extensively throughout the US, has garnered many awards from both the folk and GLBTQ communities and has recorded and co-produced eight CDs, several of which have won national awards.

In 2008 she began her choral directing career as the Music Director of the Greenville Unitarian Universalist Fellowship in South Carolina, relocating to Philadelphia in 2010.

Along with serving as the Music Director for UCWC, Miriam is on core staff for SUUSI (Southeast Unitarian Summer Institute) where she is Nightlife Director, and she is the Artistic Director for Anna Crusis Women’s Choir in Philadelphia, the longest running feminist women’s choir in the country.

Miriam is thrilled to be associated with the fabulous folks at UCWC and invites all who are interested in singing to come join the Spirit Singers. No experience is necessary and all are welcome!

Rev. Dan Schatz. Live stream and in-person. While it doesn’t receive the attention of the other December holidays, Bodhi Day is sacred to many Buddhists, who celebrate the enlightenment of a great spiritual teacher.
Dec
11
Sun
10:00 am Mythmaking, Awakenings, and Reve... @ UCWC
Mythmaking, Awakenings, and Reve... @ UCWC
Dec 11 @ 10:00 am – 11:00 am

In person and Live-stream. We will gather for a traditional Christmas Eve service with readings, carols, music from the Spirit Singers, a Christmas reflection from Rev. Dan Schatz, and the singing of “Silent Night” by … Continued
Dec
25
Sun
10:00 am Carols, Coffee, and Conversation... @ UCWC
Carols, Coffee, and Conversation... @ UCWC
Dec 25 @ 10:00 am – 11:00 am