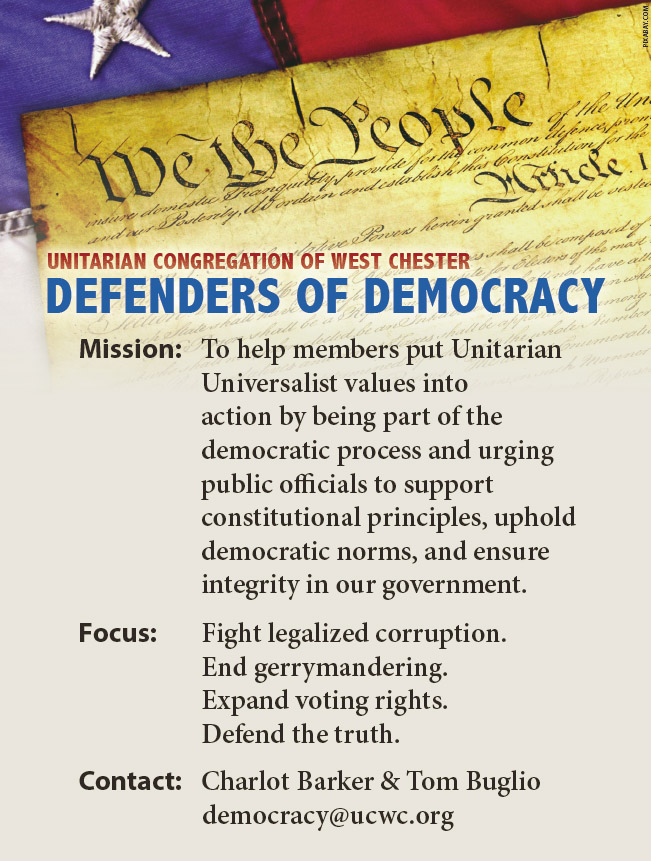 Mission: To help members put Unitarian Universalist values into action by being part of the democratic process and urging public officials to support constitutional principles, uphold democratic norms and ensure integrity in our government

Now that the election is over, it is time to reflect. 31 UCWC members participated in UUtheVote activities involving non-partisan efforts to get Pennsylvanians to vote. Our efforts contributed to thousands of UU’s all across the country involved in spurring people to participate in this historic election. We were a part of the effort that resulted in the highest voter participation in American History.

What is our next step? With new voting districts about to be drawn in 2021 and experiencing once again the outdated and sometimes anti-democratic effect of the electoral college, it is obvious that our democracy is still in need of fixing, protecting, and improving. Join us on the first Sunday of the month at 7 pm for our monthly meeting on zoom.

Are you concerned about corruption in government and our democratic processes being endangered? Would you like to help make our democracy work better for everyone?  Defenders of Democracy strives to put Unitarian Universalist values into action by participating in the democratic process and urging public officials to support constitutional principles, uphold democratic norms and ensure integrity in our government. We are focusing on four things: Expanding voting rights, ending gerrymandering, fighting legalized corruption and defending truth. Please join us!

Currently we focus on these areas:

We share information on how you can get involved and make your voice heard on these (and other) issues. Our work includes contacting and lobbying elected officials, seeking media coverage, using social media, and joining marches and rallies. We also work with like-minded groups, including the Good Government team of UUJusticePA. Using our power as ordinary citizens, we insist that our government officials respect the principles that are the bedrock of our democracy.