These were the first words transmitted by the Rover Perseverance after a harrowing landing on Thursday afternoon.  In our house we all huddled around a computer set up in the living room to watch the livestream from NASA.  When Perseverance sent its first photo, the surface of the alien world looked familiar, and for all the universe, inviting.

Eight years went into this moment, the most difficult landing in the most difficult terrain ever attempted.  NASA gave it a little better than fifty-fifty odds.  You could see the anxiety, as engineers and scientists tried to manage expectations, talking about how much they’d still learn if the mission should happen fail.  Then the Perseverance separated from its Atlas V rocket, rotated, and entered the atmosphere.  It performed the SUFR Maneuver, which literally stands for Straighten Up and Fly Right.  It deployed largest parachute ever made.  It slowed down, jettisoned the parachute and gently lowered the Perseverance Rover through the now famous sky crane maneuver.  Over half a million calculations went into that landing.  Minutes later, Perseverance sent that first image.

It wasn’t alone.  In the last two weeks, three expeditions – from China, the United Arab Emirates, and the United States, have arrived at Mars, each with their own scientific objectives.  Perseverance will search for evidence of past life, collecting samples to be retrieved by future missions.  The UAE probe Hope will study Martian weather, and when it lands in May, the Chinese Tianwen-1 will study Martian geology and begin a search for water.  Tianwen means “Question to Heaven”

Mars.  It is the red planet, home to a thousand dreams, every one of which continues to excite the human imagination.  Only two thousand years ago, Mars was not another world, but a deity, the god of War.  He was the brutal god, red, perhaps, with anger and with the flush and strain of battle.  We don’t find many stories about Mars in our mythology books, because the stories aren’t very interesting.  For the most part, they’re savage – Ovid’s description of the serpent of Mars is of a terrible, poisonous monster, a creature “as huge as the serpent that twines between the two bears in the sky….”  It was perilous to battle the monster, because the one who slew it would in turn become the serpent.  The god Mars was no benevolent deity, even to his friends.

But with Galileo’s first view through the first telescope, the planet Mars became something else – perhaps the home of an alien race, perhaps a planet once like earth, but now dying and drying, a place once flowing with water but now a deserted landscape.  For all our 21st century acknowledgment that the most sign of life we can ever hope to find on Mars is the remnant of a microbe, I think there may still be some folks out there harboring the secret hope that the Perseverance rover might uncover an ancient artifact from a lost civilization.

A century after Giovanni Schiaparelli’s observation of canalis or channels on the surface of Mars, I too, growing up, heard that they were canals, perhaps built by an extinct race.  We’ve long known that myth to be the result of optical illusion, a mistranslation, and bad science however you look at it, but for some reason it persisted so much and so strongly that when Orson Wells produced his radio version of “War of the Worlds,” millions of people actually believed that we were under attack from Martians.

Maybe the warlike image hasn’t completely gone away after all.  Nobody ever worries about attacks from Venus.

It’s Mars that captures the imagination, Mars with its thin atmosphere (too thin, the Mariner 4 spacecraft told disappointed science fiction enthusiasts), Mars with its changeable polar caps, its towering mountains, its sly hints of liquid water somewhere (maybe), its wobbly rotation, its volcano Olympus Mons, the tallest in the solar system.  Mars lifts the human spirit into a drive to explore.

It has always been that way.  Mars has always excited the human imagination.  From a god of war to the home of “little green men” to a red ball of ice and mystery, Mars has changed in our minds, but its draw has only grown with the centuries.

How can we help but be touched with wonder?  We have moved from worshipping the planets as gods to exploring them as frontiers.  The little green men once feared as Martian invaders have been replaced by little metal robots from earth reaching out with tentative grasp into the soil of another planet.

Trekkies like me know that the moral of one third of all Star Trek episodes is that humanity cannot be cooped up forever.  We have a drive to learn, explore, find new horizons of knowledge and spirit.  Look at the names we give to our rovers.  Spirit. Opportunity.  Curiosity.  Perseverance.  Questions to Heaven.

We may or may not learn more from exploring Mars than we would have from any other venture – exploring our own oceans, perhaps, or redoubling our efforts in medicine.  I’m not sure how we could quantify knowledge in any case. That really isn’t the point.

This kind of exploration is about our human spiritual quest for truth.  The more we understand about our universe, the better we understand ourselves.  When Galileo first discovered the phases of Mars, the Western world still believed that Earth was the center of the universe.  That belief informed everything they were and did.  We were literally self-centered.  It took a scientific revolution to shake us out of that, and the revolution still isn’t completely fulfilled.  We still have a flat earth society, which I recently read proudly announced they had members around the globe.  So there’s work to do, I know.

The exploration of Mars awakens our curiosity, but it can’t contain it.  And as much as we are hyper aware of so many problems in the world right now right now – the pandemic, politics, the deadly ice and cold in Texas – I hope we also pay attention to what is happening 126 million miles from here.  Maybe what we discover will release our pent up human passion for truth.  Maybe it will awaken our imaginations and remind us what is possible.

A hundred years ago the astronomer Maria Mitchell spoke of her work in profoundly spiritual terms.  “We especially need imagination in science,” she said.  “It is not all mathematics, nor all logic, but is somewhat beauty and poetry.”  Reading her words again this past week I began to understand why she became a Unitarian.  “Question everything,” she said.  The vision isn’t unique to Maria Mitchell, any more than it is to Leonardo DaVinci, Johannes Kepler, Richard Feynman or Guo Shoujing, the thirteenth century Chinese astronomer.  It’s a vision that permeates all scientific exploration, on Earth and in space alike.  It goes beyond mere inquiry.  Imagination and poetry are central to the process, because any genuine quest for truth begins with the recognition that what we know is only the smallest part of what we may yet come to understand.  In order to seek truth with fresh eyes, we need to be able to imagine some of the ways our universe and our sense of the universe could be different.

This is science, but it isn’t only science.  It’s also a fundamental part of our way of making meaning as Unitarian Universalist seekers of truth.  We need poetry, curiosity, and imagination as well as inquiry, whether we’re completing the next step in a long series of chemical experiments, classifying quasars, or deepening the spiritual and ethical truth of our hearts.  Maybe one of the reasons the planet Mars calls to us so insistently is that it reminds us not only how to learn but also how to live with wonder and amazement and a deep yearning for new ways of understanding and being.

The study of Mars is as much a spiritual quest as a scientific one.  It’s the symbol of everything we may one day discover about the universe in which we live, a sign of learning and also hope.   It’s the hope that even a fossilized microbe could give us if it told us maybe we’re not alone in the universe, hope that one day we may find ways to expand the horizons not only of human knowledge but of human living, and the far more important hope that rises in our hearts when we think of ourselves not as nations but as humans from Earth touching another world.  In reaching out to other worlds, could we learn something about how to reach inward to this one?

Fifteen years ago, then President Bush announced plans to put human beings on Mars within twenty years.  The target date has changed – I think we’re now looking at 2033, and it still probably won’t happen by then.  But I now believe it will happen, and I hope when it does that it won’t be the work of one nation, and especially not a corporation, but the combined efforts of many countries.  I hope when it happens it won’t be an American or Chinese or European or Emirati achievement, but a human achievement.  Maybe it could help us grow up a little as a species.

I realize this is an optimistic dream.  But every time we remind ourselves that we are one people on this planet, and that this planet is a very small place to be, we make progress for all humanity.  Maybe the arrival of these new robotic explorers from three nations is an opportunity to reflect not only on what it would mean to all of us if they were to make astonishing discoveries, but also on our common humanity.  We are diverse but we are together, traveling through space and centuries as neighbors and perhaps one day as friends.

Earlier this week I went out on my back porch, huddled against the cold, and looked at Mars.  There it was, high in the southwestern sky, small and distant, distinctly red, and close enough that we have begun to touch it.  I imagined the tiny artificial ambassadors crawling so slowly and intentionally across its rust red surface.  It was a beacon in the sky, a reminder of curiosity and imagination and possibility and wonder.  As the eyes of one planet gazed into another, it was even a reminder of love.  It looked, for all the universe, inviting.

“Do not look at stars as bright spots only –
try to take in the vastness of the universe.” 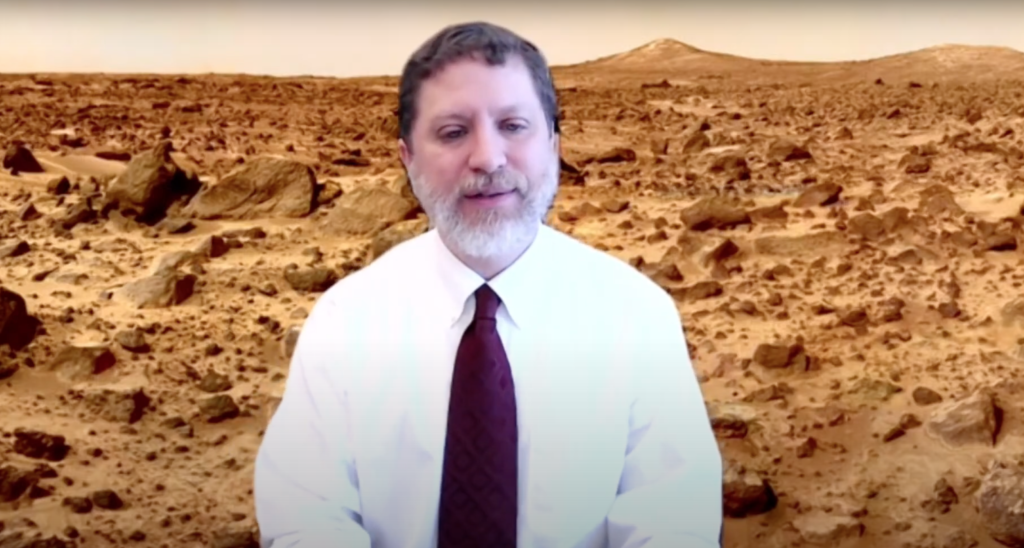 Brett Goldman, UCWC Member Denial, naivete, anger, acceptance, joy — our range of attitudes about aging are endless. Let’s take some time to stare this stark reality in the eye, look ourselves in the mirror, … Continued