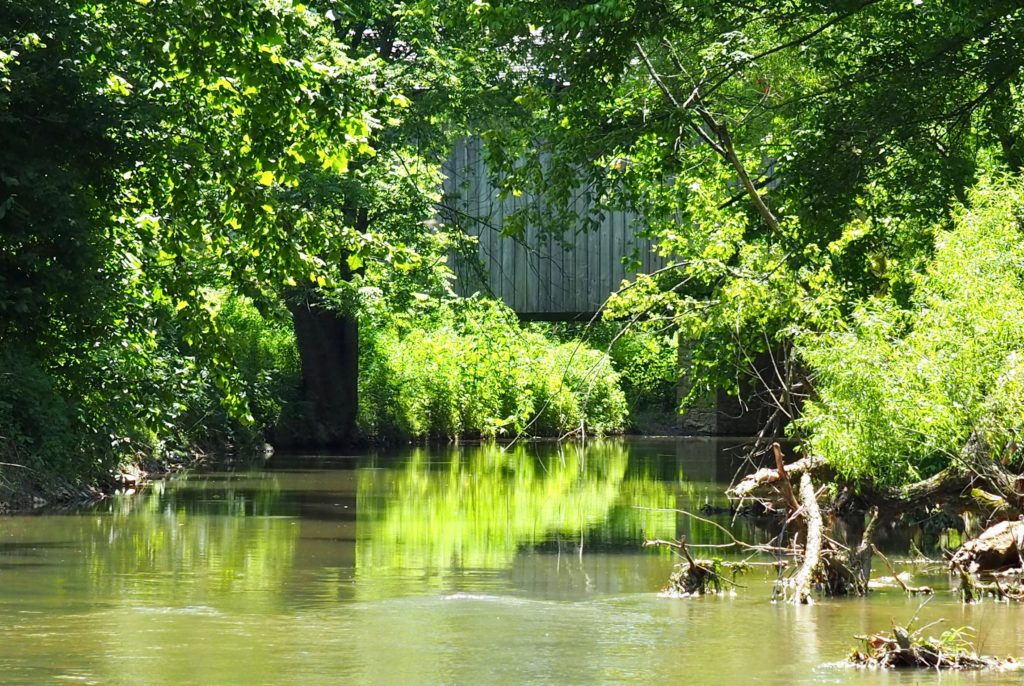 Whenever you advise a ruler in the way of Tao,
Counsel [them] not to use force to conquer the universe.
For this would only cause resistance.
Thorn bushes spring up wherever the army has passed.
Lean years follow in the wake of a great war.
Just do what needs to be done.
Never take advantage of power.

Force is followed by loss of strength.
This is not the way of the Tao.
That which goes against the Tao
comes to an early end.

I used to see it every time we came around the Washington Beltway, driving from Northern Virginia to the Maryland suburbs, where I grew up.  Just after the George Washington Parkway, and before we got as far as the Clara Barton, right there on the bridge, with a spectacular view of the Potomac River beside it, was a huge sign – “Maryland Welcomes You,” it said, “Please Drive Gently.”

I always appreciated that about my home state.  Please drive gently.  It’s easy to say and easier to forget, especially when you’re on the Beltway, and especially when it’s rush hour, or you’re in a hurry to get somewhere, or somebody in front of you doesn’t quite know where they’re going, or what they’re doing, or when there’s some construction going on.  We need the reminder.  Please drive gently.

Just how necessary the “Please drive gently” message proved to be, was demonstrated by another sign, put up during a years long highway improvement project, right next to the first. “Maryland Welcomes You.  Please Drive Gently.”  And a bigger sign, in blaze orange, that read, “Prepare For Sudden Aggravation.”

When I think about gentleness, I often start with driving, because I am from Maryland, and because outside of a political argument, it’s the situation in which it is both most important and most difficult to be gentle.  It’s hard to honor the inherent worth and dignity of the person tailgating you, or who just cut you off, or who is going ten miles under the speed limit on a long and winding country road, and you have somewhere to be. The anger that wells can be almost seductive.

I once heard a country song that began,
“I was just flipped off
By a silver haired old lady
With a ‘Honk if you love Jesus’ sticker
On the bumper of her car.”

Now, I don’t know many Unitarian Universalists with “Honk if you love Jesus” stickers, but I’ve seen plenty with stickers that said “Open minds, loving hearts, and helping hands,” or “Love is our doctrine, service is our prayer,” or “Respect the inherent worth and dignity of every person,” or simply, “Love.” And I imagine even the drivers of some of those cars have had their patience, shall we say, tested a few times. I know it, because I used to have one of those bumper stickers on my old car, and I am far from innocent in this area. I suspect others, like me, don’t always pass the test.

There’s a poem by Wendell Berry that says it well:  “Do not think me gentle,” he says, “because I speak in praise of gentleness…  That I may have spoken well at times, is not natural. A wonder is what it is.”

My own version of this came when I sat down to write this week, and found myself stomping and swearing at the computer when the file wouldn’t load properly.  That’s not even to mention my appalling behavior in the morning when I haven’t quite woken up yet.  “Do not think me gentle.”  But I forgive myself, as I hope you will forgive me.  As for swearing at my computer, I can only say that it’s not easy to write a sermon on gentleness when you’ve been spending your evenings binge watching Game of Thrones.

So I think it’s important to be clear, from the outset, that I don’t expect any of us to be gentle all of the time.  I don’t even believe we should always be gentle, at least not in the immediate social sense.  Gentleness is not the same thing as gentility.

Too often people who confront and question injustice find themselves silenced or told to speak more gently, because speaking directly makes some people uncomfortable.  This is one of the ways that male supremacy, White supremacy, heterosexual supremacy, and all the other injustices perpetuate themselves. The appearance of gentleness means nothing if it serves only to uphold an unjust, ungentle world.

Gentleness is not about “making nice.”  It is about treating people in a way that honors our Unitarian Universalist values. It’s about creating a society and a world which lives those values.

The inherent worth and dignity of every person.

The goal of world community, with peace, liberty and justice for all.

Respect for the interdependent web of existence, of which we are a part.

These are principles we hold dear, and they lead us to the creation of a more gentle world. They envision a community in which we can say hard truths and we can hear them also, because we understand that even though what we have to say and what we have to hear may be difficult, nobody is going dismiss our humanity.  Nobody will give up on our potential.  Nobody will write us off because we are the wrong color, or express our sexuality in the wrong way, or come from the wrong place, or believe the wrong things, or identify with the wrong gender.  Nobody will give up on us even if we ourselves have failed in our actions or intentions, because gentleness does not seek to punish. Gentleness does not seek control.

I think if we can learn to live in the spirit of this kind of gentleness, then we may very well find ourselves living more gently from day to day.  I’m not saying we won’t curse at the computer (or that the computer will care), or be in good moods all the time, and I’m not saying we won’t or shouldn’t give it our all out on the playing field or in the stands.  But maybe we will drive a little more gently, because some part of us remembers the effect our living has on the lives of those around us.  Maybe we will speak a little more gently, because we understand that we can’t separate our actions every day from the world we are trying to build.  As Mahatma Gandhi said, “The means may be likened to a seed and the ends to a tree.”  What we do in service of the future we seek to create will shape what that future looks like.

It makes sense, because to live gently is put more kindness into the world, and right now our world needs more kindness.  I won’t lie; in many ways it feels like we have been moving in the wrong direction.

We have witnessed, across the world, a kind of brutality that thrives on division, hatred, and rigidity. We’ve seen it in the United States and we’ve seen it in Great Britain, and in Brazil, and in the Philippines, and in Israel, and in Palestine, and in India, and in Pakistan, and in so many other places.  It is insidious, because it plays on real fears that many people have for their lives and their livelihoods, and it is cynical, because its sole purpose is to gain power.

I wish I could say that the culprits all belong to one side or the other of the political divide, but I can’t, and not just because of the tax laws.  The truth is I’ve seen it on the right, and I’ve seen it on the left. I see it when people I respect and care for and love talk dismissively about other people I respect and care for and love – “those rednecks,” “those people from Kentucky,” “those Baptists,” whatever it is.  When I went to a Quaker college, one person kept talking about “Those scholarship athletes.”  It took me a while to realize “those scholarship athletes” were mostly Black and put two and two together.  I’m not sure he ever did.

Learning to live gently means letting go of these kind of categories and recalling what we already know, which is that every human being is precious and sacred.  Every human being deserves the dignity of our kindness. It doesn’t mean we do anything less for what we believe.  It doesn’t mean we don’t stand up for ourselves and others.  It does mean we listen to what others are trying to tell us, even when they are not gentle and even when it is not comfortable to do so. It means learning to be gentle with ourselves.  It means holding on to our best instincts, even when it would be so really satisfying to be as obnoxious to somebody else as they’re being to us, and as they so obviously deserve.  But that doesn’t get us anywhere.  That just tears us further apart from one another.

This is it what the Tao Te Ching teaches:

“Thorn bushes spring up wherever the army has passed.
Lean years follow in the wake of a great war.
Just do what needs to be done.”

Just do what needs to be done.  It sounds simple, but it’s hard to put into practice.  I’ve spent much of my life trying to live up to this kind of ideal, and pretty much every day I find myself doing the opposite at one point or another.  So much gets in the way – anxiety, exhaustion, fear, the social situation in the moment. It’s hard to remember to breathe. Wait.  We don’t need an answer for everything right away.  We can take a moment to re-collect and find the gentleness within.

We embark on a path that is at once rewarding and sacred, that is deeply personal, and that builds the beloved community.  It is the spiritual path of gentleness and justice, compassion, and hope.  It is a Unitarian Universalist path, which I am grateful to share with you.

We go from this place
in the gentleness of giving,
the strength of  love,
and the hope of renewal.

Brett Goldman, UCWC Member Denial, naivete, anger, acceptance, joy — our range of attitudes about aging are endless. Let’s take some time to stare this stark reality in the eye, look ourselves in the mirror, … Continued